Late last year we were awarded a contract to Repair and Restore a Tesserae Mosaic floor at prestigious property in the Lace Market area of Nottingham City Centre. The property was once Watson Fothergill’s office who is a famous Victorian architect who ran his business from the site in 1897 until 1912 when he retired. He designed over 100 Victorian & Edwardian buildings from 1864 mainly in Nottinghamshire and some further afield. They were mainly in the Gothic Revival and Old English Vernacular Style.

Inside the property is an Edwardian Tessera Mosaic Clay Floor on three small landing levels in the entrance & stairwell. Through historic building movement, inherent moisture issues, and a lorry crashing into the property a couple of years ago. The floor had developed structural movement cracks. This had resulted in sections of the tiles being raised or lowered and others becoming cracked, damaged and loose. Previous repairs to stabilise the damage had been carried before, but this has mainly involved just filling cracks.

Repairing the damage to the floor was long and painstaking work which took three days. We started by removing the makeshift repairs and meticulously rebuilt the damaged areas replacing the damaged loose tiles, and levelling the floor were possible until it was back to a uniform appearance.

Once the repairs were complete, we carried out a low-moisture restorative cleaning process which took a further two days. The process involves using Tile Doctor Remove & Go coating and contamination removal product which is first sprayed onto the floor and left to dwell for ten minutes. The floor is then scrubbed with a set of Tile Doctor abrasive burnishing pads which level off the raised tiles and hone them to remove years of ingrained soiling. The resulting slurry is removed by vacuuming and lightly damp wiping with microfibres cloths to ensure the use of moisture was kept to a minimum. We use a low moisture cleaning system to minimise the risk of efflorescent salts appearing on the floor as it dries out; old floors are prone to this problem as they were installed without a damp proof membrane which is a relatively modern invention.

The building is being converted into accommodation and heating had not yet been installed when we carried out the work in December 2018. As a result, it was necessary to force dry the floor with portable heaters and air movers.

Only when we were happy the floor was dry did we apply a sealer. For this situation I used four coats of Tile Doctor Colour Grow which is a colour enhancing impregnating sealer that seeps into the pores of the clay tile protecting it from within. This restored colour to the tiles and being a fully breathable product will allow the floor to breath and pass moisture vapour from the sub floor. Again, this is a very important consideration due to the lack of a damp proof membrane, if moisture was trapped below the tile then it would slowly spread out towards the walls resulting in rising damp. 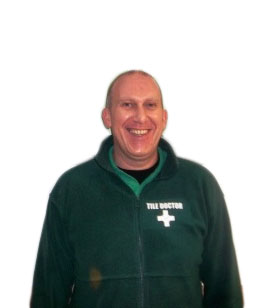 My name is Parkin not Parker. The work carried out by Steve and kay was exceptional .Amazing craftsmanship and determination with great attention to detail and so very patient with what turned out to be a challenging floor.Would recommend without hesitation
Andrew , Winthorpe Newark

Thanks, the floor looks much better and is quieter too – no more clanking and crunching loose tiles as we move around.
Charlotte G, Nottingham

Steve was very punctual both for the assessment visit and on the day of the work being carried out. Email communications were also very prompt. We are very pleased with the renovation work he did in our bathroom.
Joyce S, Nottingham

Steve and Kay did a fantastic job, repairing and restoring our old quarry tile floor. They filled in a large missing section and replaced and re-set a large number of broken tiles. After the cleaning and treating, it now looks superb.
Marek N, Nottingham

I thought the quote was high for what I thought I needed done but when the work was completed I was so very glad I went ahead with it. All of the bathroom was gleaming, pristine, better than showroom condition. The result far surpassed my expectations. I was so pleased and excited I have been telling my relatives and friends. I would definitely recommend Steve Carpenter and Tile Doctor.
John C, Derby

Amazing job! Thank you so much. We are over the moon with the floor. What we thought would be a relatively simply job quickly turned into a nightmare for you, thank you for for being so professional and completing it!
Amiee F, Radcliffe On Trent

Wow.. What a transformation. We’d tried ourselves to get the grout mist removed with no success. We got in touch and I have to say the professionalism, communication and quality of work is amazing. I would h ve absolutely no hesitation in recommending to anyone. Thanks again, Paul.
Paul S, Castle Donington

Super job carried out in a professional manner. Met all my expectations and gave good advice regarding ongoing maintenance and Tile Doctor products. Second time we have used Steve and will do so again without hesitation.
Graham R, Ruddington